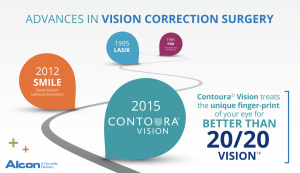 Laser eye surgery technology has evolved continuously since it was first introduced in the late 1980s. This blog post discusses this evolution in laser eye surgery technology, from ASLA/PRK to Contoura Vision, highlighting how the Alcon Refractive Suite is the only laser platform to incorporate the latest cutting-edge technology.  Results achieved with this platform at Freedom Eye Laser reflect and surpass those demonstrated in the Contoura Vision Trials.

Laser vision correction was first introduced in the late 1980’s as a procedure called ASLA, otherwise known as advanced surface laser ablation. This procedure involves removing the corneal epithelium playing laser directly onto the front surface of the eye. Although it is effective in correcting vision, the procedure causes considerable discomfort for several days and takes quite a long time for vision to recover as the removed epithelium has to regrow underneath a contact lens for 3 to 4 days and then takes a further 5 to 6 weeks for final remodelling for optimal vision. Due to this slow recovery, PRK was eclipsed by LASIK.

During LASIK (Laser-Assisted In Situ Keratomileusis), an oscillating blade (labelled a microkeratome) is used to create a hinged flap in the cornea. This flap was underneath the corneal epithelium.  By lifting the flap and performing the laser ablation underneath it, the flap is then replaced over the treated area which serves as a natural bandage.  This technique allowed for next day recovery of vision, and discomfort was significantly less.

Blade assisted LASIK, in turn, has been eclipsed by the latest generation in laser eye surgery technology utilising a femtosecond laser to create the flap. A femtosecond laser essentially eliminates intraoperative risk as a computer-driven laser is not able to develop an abnormal buttonhole flap that could occasionally occur with blade LASIK. The fact that a laser can create cleavage planes in any direction also allowed flaps with a vertical sidecut on the margin that allowed the flap to slot back into position like a manhole cover. This essentially eliminated micro wrinkles within the flap that were routinely seen with blade laser. This has resulted in improved visual quality.

The next innovation in laser eye surgery technology was SMILE/RELEX.  By utilising just a femtosecond laser to create a lenticule of tissue that was removed, shortsightedness could be corrected without the necessity for an excimer laser. SMILE as the procedure is now known, is effective, however, the accuracy of the procedure in published literature is between 65% to 88% of patients achieve 6/6 vision with one treatment. SMILE was originally thought to be safer than LASIK due to a reduced risk of ectasia, an unstable cornea following laser correction and to induce less dry eye. Recent studies however, have shown that there is no statistical significance with these risks between Femtosecond LASIK and SMILE. (Read more information on Relex/SMILE here).

The most advanced innovation in laser vision correction has occurred over the last two years with Contura Vision topographic linked LASIK. This innovation utilises 22,000 data points that measure the corneal surface and not only corrects the glasses prescription but simultaneously fixes any subtle irregularities in the corneal shape. Not only is this procedure as safe as SMILE, it is also far more accurate with 100% of patients at Freedom Eye Laser achieving 6/6 vision with a single treatment and over 58% achieving 6/3.5 vision unaided (read more on our results here). Clinical trials have also demonstrated that around 50% of people are achieving vision 2 lines better than they previously had with glasses and contacts. This is a first in the history of eye surgery and certainly represents the apex of technological development.

Freedom Eye Laser is proud to use this latest generation technology. We selected the Alcon Refractive Suite as our laser platform for its unsurpassed treatment accuracy. Your comfort during the procedure and how quickly and easily it is performed is unmatched by other platforms.

If you would like to obtain more information about this exciting advance in achieving freedom from glasses and contacts we would be delighted to evaluate you for suitability. Please call 02 9981 1771 for an appointment.

For further reading, continue to our blog on Contoura Vision LASIK, the pinnacle of refractive performance.

What causes dry eye and what can I do?